What was going to be the creation of another paramilitary block of the Castaño household turned into one of the cruelest massacres in recent history. In April 2001, around 220 paramilitaries set out for El Naya, a region bordering the states of Cauca and Valle del Cauca.

Almost 10 years after these events, in March 2011, some of those responsible for the massacre, accepting the process of transitional justice, told authorities the truth about the paramilitary raid.

After hearing the testimony of the perpetrators, interviewing victims and carrying outan extensive investigation, the Prosecution Unit 18 of Justicia y Paz presented 66 paramilitary members to charge before the Superior Court of Cudinamarca.

On Friday, June 15, the investigative body described to a magistrate how the raid was planned. According to prosecution records, the population of El Naya first fell victim to Bloque Calima in May 2000, when the Pacific and Farrallones fronts were created.

With these groups the paramilitaries encircled the community and gained control of the two entrances to the region. The maritime route of Buenaventura was blocked by the Pacific front, and the land route of Buenos Aires was controlled by the Farallones front.

According to the prosecution, Bloque Calima installed illegal roadblocks to control the entrance of all products to El Naya.

In his testimony, Elkin Casarrubia Posada (alias ´El Cura,´ or ´The Priest´), paramilitary boss and second-in-command of Bloque Calima, explained that the group took actions against the community because Carlos Castaño had ordered them to make themselves felt when they entered an area for the first time.

He added that the group had information that the guerrillas were present in El Naya and took kidnapping victims to the area, and that the people of the region lived off illicit crops and charged “taxes” for the entry of gasoline and cement.

During the hearing, the prosecution described how the raid resulted from the ambitions of Vincente Castaño, who in early 2001 ordered Éver Veloza García (alias ´HH´), the boss of Bloque Calima, to create “a block in the Pacific Coast that connected to the coastal municipalities of Valle and Cauca, based in Guapi (Cauca).”

Castaño´s idea was to create the Pacific Block, which would stretch from the coasts of Nariño to those of Chocó, in order to gain control of the area´s drug trade.

This account was given by ´HH´ and corroborated by ´El Cura´ and Juan Mauricio Aristizábal (alias ´El Fino´), the former director of finance of Calima, who stated that another one of Castaño´s aims was “to combat Frente 30 (of the FARC) and the ELN, who were exploiting gold mines in López de Micay.”

The prosecution said that between April 4 and April 5, before the convergence of 200 hundred paramilitaries, ´HH´ met in the town of San Miguel, Buenos Aires with senior officials. Map in hand, he traced a route to El Naya.

After the meeting, the men brought by Jair Muñoz Borja (alias ´Sisas´) from the village of La Sonora, in Trujillo, Valle, arrived at the meeting point. Members of the Farallones front were also present.

Between April 5-6, the troop was formed on the soccer field of Munchique, stocked with new war material. It was explained that they should “arrive at Guapi and form a new group to consolidate the finances of Bloque Calima.”

The bosses ´Zarley´(of the political side of the block), ´Sancocho´ (of the urban Farallones front), ´Giovanny´ (of the Central Front and former boss of Los Urabeños), ´Ramiro´ (of the Buitrera front) and ´La Marrana´ (of the Yumbo front) were also present at the meeting.

In his testimony, ´El Cura´ told the prosecution that no one was arrested at the meeting of nearly 220 paramilitaries from different regions because they coordinated with members of the Armed Forces when conducting large-scale operations.

One of the bosses of Bloque Calima said that he received war material for the raid of El Naya from the Pichincha Battalion, based in Cali. Among the contacts he mentioned were captain Zambrano, colonel Tony Vargas Petecua, general Francisco René Pedraza and Claudia Jaimes, the wife of a corporal.

He claimed to have received camouflage and vests from Mrs. Jaimes and colonel Vargas. In support of his testimony, Mrs. James lived in the battalion and from there took part of the war material that was sold, later given to ´HH´ in Munchique on April 5.

At one point, the boss recalled entering the office of colonel Vargas and giving him between 10 and 15 million pesos. He added that he had the support of lieutenant Salcedo so that his partners could pass through a roadblock in Villa Rica, Cauca.

Another former paramilitary who participated in the massacre and came to Munchique from Valle del Cauca said that their trucks were stopped at a roadblock near the Buga tollbooth. Though there were 100 men inside, armed and camouflaged, they were allowed to advance after whistling twice, the signal that had been coordinated.

One witness told the prosecution that on the date of the raid of El Naya, the Army was present in Timba, but the paramilitaries arrived in Suárez in three trucks without being stopped. He added that later on, they had to pass through a sector known as El Amparo, where there was a military base, but the Army did nothing.

Regarding the movements of the paramilitary troop, one of the accused members of Bloque Calima said that the troop coordinated with captain Zambrano and colonel Vargas. “These officials agreed to move the troop that was in the town La Esperanza, as the paramilitaries had to pass by that place. They were similarly in agreement that the raid would move to El Ceral, where, according to soldiers, they had knowledge of a guerrilla presence,” the prosecution said of his testimony.

After being formed and supplied, the 220 paramilitaries began their movement toward El Naya. Between April 7-8, they arrived in Bellavista from Suárez, under the command of ´El Cura.´ Luis Arcia Martínez (alias ´Chilapo´) and Jair Muñoz Borja (alias ´Sisas´) served as his second-in-command.

The paramilitary troop divided itself into four groups. The first was named Centella, composed of the special combat groups known as the Boinas Verdes and the Boinas Rojas and responding to the orders of ´El Cura´ and ´Nechi.´ The group was made up of 120 men and escorted the rest of the troops toward the entrance of El Naya in Patio Bonito. It later withdrew from the area.

The other three groups consisted of 35 men. The first was the Grupo Atila of Nilson Javier Pérez (alias ´Pájaro´); the second was the Grupo Escorpión of Jhon Poso Giraldo (alias ´Eliécer´) and the third was the Grupo Fantasma of ´El Teniente.´ Upon arriving at Patio Bonito, ´Chilapo´and ´Sisas´ assumed general command of the three groups, which would be the origen of the Pacific Block of the ACCU in Cauca.

The prosecution explained that the Grupo Fantasma was in charge of beginning the raid and securing strategic points such as hills. The Grupo Escorpión went in the middle and the Grupo Atila guarded the rear. They marched separately, at a distance of 30 minutes to an hour.

In El Naya, the paramilitaries captured a guerrilla suspect known as ´Peligro´ (´Danger´), who, in exchange for sparing his life, agreed to serve as their guide. He identified the majority of victims who were later killed.

The paramilitaries said that although their goal was not to commit a massacre, it was clear that if it was their turn to combat the guerrillas or kill suspected militants, they would have to do it since it was one of their daily orders.

After several weeks of presence in the area, around 73 paramilitaries were captured by the Navy and the Army. Others were attacked by the inhabitants, or drowned. As a result, the ambitious project of Vincente Castaño to control the Pacific Coast was thwarted.

In this massacre the prosecution has identified 24 people who were murdered and Acción Social has calculated that more than three million people were displaced. Some inhabitants say that the actual number of murders is higher, since the paramilitaries threw bodies into ravines; however, these people have not been identified and their remains have yet to be found.

At the beginning of the hearing, set to end June 21, the prosecution gave an historical overview of the indigenous and African communities that have populated El Naya since the seventeenth century, and also presented early warnings that were ignored before the massacre was carried out. 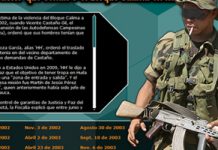 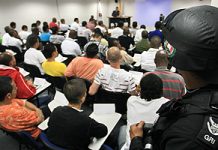 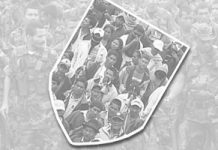