The Bloque Vencedores de Arauca of the ´Mellizo Mejía´ paid salaries to soldiers and public officials in order to maintain a presence in the region over five years.

The Arauca paramilitaries developed an accounting system to pay “salaries” to members of the Armed Forces and public officials and to ensure that their identities remained secret. They also allied themselves with an Air Force captain, a pilot for Carlos Mario Jiménez (alias ´Macacao´), to secure intelligence videos and to buy a system that allowed them to track the land movements of army and guerrilla troops.

These details were described by prosecution unit 22 of Justicia y Paz during the most recent hearing of legalization of charges against Miguel Mejía Múnera (alias ´El Melizo´) and eight other demobilized members of Bloque Vencedores de Arauca of the AUC, including Orlando Villa Zapata (alias ´Rubén´ or ´La Mona´), who served as the group´s second-in-command.

Based on the confessions of these members, Justicia y Paz was able to document that between 2001 and 2003, a former police officer linked the paramilitaries to the Armed Forces. During the hearing the prosecution identified Yesid Baena Toro (alias ´Martín´) as “the former Bogotá police officer who had contacts and managed the sources of certain corrupt city officials.”

According to the prosecution, over three years ´Martín´ asked ´Rubén´ for $50 million pesos each month to pay the “salary” of members of the police, military and the DAS. They began in the town of Tame.

´Martín´ was responsible for distributing the money among soldiers and investigators, and kept his records in code that only he could decipher, in which most were identified with a capital letter and number.

Beginning in July 2002, ´Martín´ extended his contacts to Arauca, the capital, as well as to Saravena, Fortul, Arauquita and Cravo Norte. In these places the Armed Forces gave “battle orders,” intelligence reports where they identified the names and locations of suspected guerrillas in the region. In the Tame police station, many of those who were detained were identified and killed by the paramilitaries following their release.

During their testimony, the demobilized paramilitary members spoke of the payment process. “They occurred on the fifth day of each month. If the sixth came and they hadn´t been paid, the police would make inquiries in the city and capture the urbanos [paramilitaries in the urban area]. To get them out, they would pay between $1 and $2 million pesos, and if they seized arms they would resell them to the paramilitary group. And if they didn´t buy them, they would offer them to the guerrillas,” the prosecution read.

Eventually, ´El Mellizo´ began to have differences with ´Martín´ and the former police officer was killed. A man with the alias ´Cantante´ became his replacement, and at the end of 2003 he implemented a new “payment” system which was only carried out following “results.”

If the paramilitaries won a battle or managed to capture or assassinate suspected guerrillas, the block paid the officials who provided them with the information. In 2003, the paramilitary group began to pay the CTI for information regarding the Public Prosecutor´s Office.

´Cantante,´ like ´Martín,´ was killed and ´Zamir´ selected as his replacement. In 2004, with the mediation of a lieutenant and private pilot of ´Macao,´ the Bloque Vencedores de Arauca bought a topographic location program

According to the prosecution, the program cost $4 million pesos and was operated from a computer by Jair Ruiz Sánchez (alias ´Pagado´). The system allowed them to locate through coordinates the land movements of any troop in the region. With the information and support, the paramilitaries committed massacres including those of Puerto Rondón and Cravo Norte.

The prosecution informed the magistrates of Justicia y Paz that due to the nomenclature used by ´Martín´ and the fact that the demobilized members of the block haven´t remembered the names of the soldiers and officials who helped them, they have only been able to identify enough names and descriptions to investigate six officials, five from the army and police and one from the DAS.

The magistrate Uldi Teresa Jiménez, however, questioned why the demobilized members had failed to confess the names of the soldiersand officials, and asked Orlando Villa Zapata (alias ´Rubén´) about the situation. “From the beginning we have been committed to the process,” the former paramilitary boss said, “but unfortunately those who have the information are either dead or detained and not involved in the process of Justicia y Paz. I´ve found some information, but Pacheco, Acevedo and Lucas [paramilitaries not involved in the process] don´t want to give any information.”

The magistrate said that the confessions of the paramilitaries cannot remain in generalities. “It´s not a secret that the Armed Forces have aided the AUC in their entrance and expansion,” she said. “But we continue working with generalities, and this does not favor the principle of truth. We have to dismantle this structure, because it wasn´t only the block who did this, but all of its collaborators.”

These sentiments were echoed by the deputy prosecutor and victim advocates, who explained that they don´t understand how, in a town as small as Tame, where the paramilitaries remained for five years (2001-2006), the demobilized members fail to remember the names of the soldiers and officials who aided them. “I paid attention to the results,” Villa Zapata responded.

The judge called upon the prosecution to continue investigating the connections that public officials and soldiers maintained with the paramilitaries. “This situation cannot continue in which those who have the information are either dead or not part of the process,” she concluded. 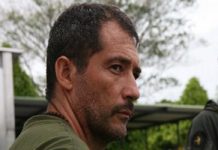 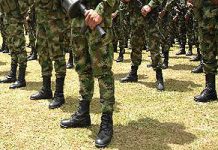